What is Mario Kart™ 8 Deluxe?

What coaches, parents, and players need to know about Mario Kart™ 8 Deluxe 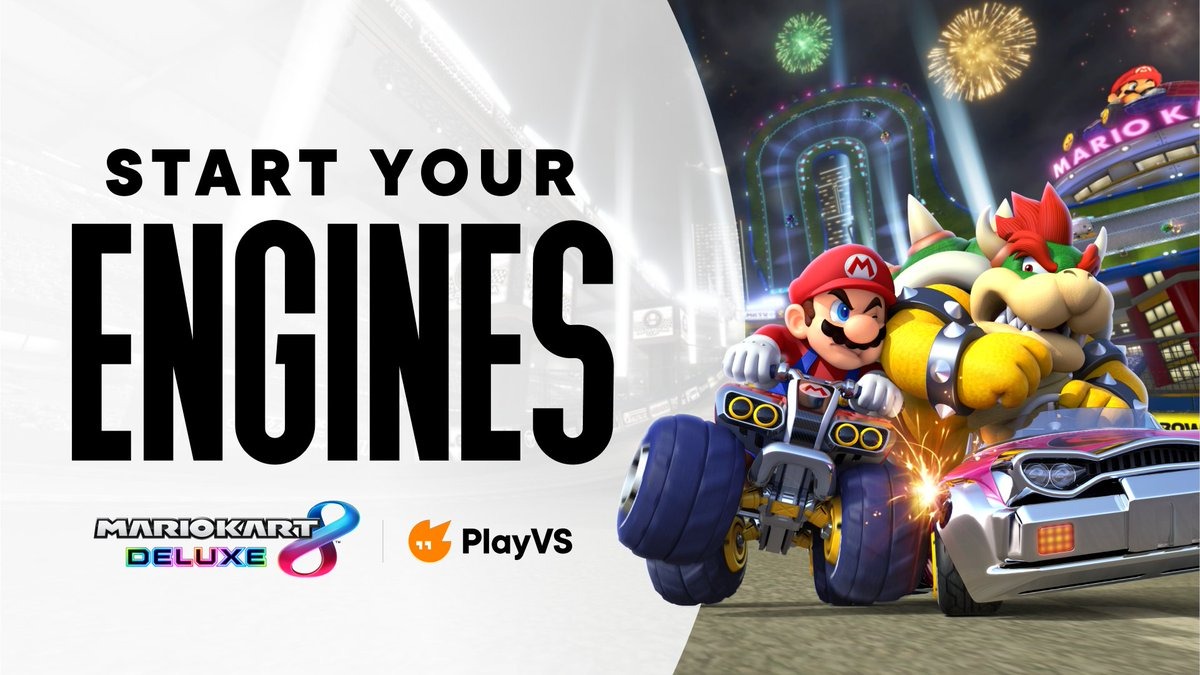 PlayVS is thrilled to offer league enrollment for the most successful racing game franchise of all time, Mario Kart™ 8 Deluxe!

Mario Kart™ 8 Deluxe is a multiplayer kart racing video game developed and published by Nintendo. Players control their beloved Mario franchise characters in kart racing collecting a variety of items to hinder opponents or gain advantages in each race. Many new driving features are available to players such as motorbikes, hang gliders, underwater racing, anti-gravity driving, and vehicle customization. Mario Kart™ 8 Deluxe is rated E for Everyone.

How many players are on a team?

A PlayVS Mario Kart team will consist of 4 players on their main roster with up to 4 possible substitutes on the bench.

Players will compete in a Best of 3 Team series consisting of 6 races per game. At the end of each race players are awarded points depending on their placement at the end of the race. Each player's points on the team will contribute to the team’s overall total points. At the end of all 6 races, the team with the most points will win the game. The first team to win 2 games in the series will win the match.

Which platform will the game be played on?

What days will Mario Kart ™ 8 Deluxe be played on?

Mario Kart’s official match days will be on Thursdays in order to avoid any possible scheduling issues with schools also competing in other Nintendo Switch titles.

What are the common game settings we can expect?

What hardware will be required to play?

Why is track selection Random?

Due to the in-game match flow found within Mario Kart it felt like the best possible experience was to allow for full randomization of tracks during a match. It becomes very difficult to create a track selection system that will work well and not break the flow of the game. We also toyed with the idea of using a specific set of tracks throughout the season but also found it difficult to enforce in-game without causing a large number of issues with competitive integrity and an influx of match disputes. In order to find the best middle ground that allowed for the largest variety of tracks and was equally as fair for both competing teams, we decided that it would be best to keep track selection to Random.

Can I switch Kart setups and Racers mid match?

Yes, in between races you can actually use the in-game menu to change your Kart and Racer within a limited amount of time before the next race begins.

Can I use my Mii as a Racer?

Yes, but we require your coach to review and sign off on the Mii character. Note that any Mii's found in violation of the PlayVS or Nintendo Code of Conduct will result in penalties applied to your account and the team. This includes anything that can be seen as offensive, vulgar, or bad sportsmanship.

Am I allowed to use shortcuts in the track while racing against my opponents for an advantage?

Anything that the game allows you to do in a race that would not be considered a glitch or cheating is allowed. There are actually a large number of shortcuts per track that we encourage teams and players to find and study in order to improve their overall lap times!

What happens if a player disconnects?

If a player disconnects from the game, their points will be removed from the in-game scoreboard and lost. In order to avoid issues like this, we encourage teams to use the Nintendo Switch’s in-game screen capture button to take screenshots in between races. If a player disconnects but a coach is able to show screenshots of their total points at the end of each race, we will allow them to use those points to decide the final outcome of a game when choosing a winner. If a player disconnects but there is no screenshot proof of their previous points, we unfortunately cannot take their points into account when deciding a winner. This will be covered in more detail within our rulebook.

Where can I find a detailed rulebook?

The most up to date Mario Kart 8 Deluxe Rulebook can be found here.