Scheduling history, how matchups work, and how to use the Smart Scheduler to find an opponent

At PlayVS, we're committed to finding you an opponent at your scheduled match time. To reduce the number of forfeits and the impact forfeits have on other teams, we’ve developed the Smart Scheduler. Our goal with this new system is to allow teams to play during their originally scheduled match time as often as possible.

In Fall 2021, we used a Swiss Hybrid block scheduling system. The issues with the system were that teams who unenrolled in the middle of a block or season would adversely affect the remaining teams who showed up each week.

In Spring 2022, we moved to a week by week Swiss scheduling system and saw improvements, but we were not happy with the current match completion rates. The core issue was that we could see when teams received a forfeit, but we had no way to easily match teams who were forfeited against.

Our new system allows for Swiss scheduling to still take place, but allows for teams who lose an opponent to be re-matched on their original match day.

There are two ways your team can matchup with an opponent to compete against each week:

Important: The queue will close 30 minutes after your scheduled time. Please don’t leave the queue while you wait for the match to start as it may result in a forfeit for your team! Although the queue remains active, we still recommend that you remain on this page. If you need to leave the queue, please click "Leave Queue".

Use the Smart Scheduler to Find an Opponent 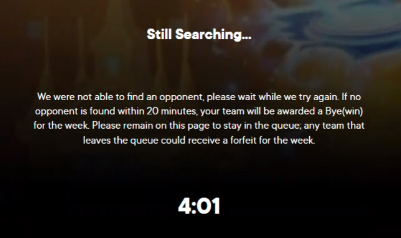 3. Once your opponent is found, the Match Queue will show “Opponent Found”. 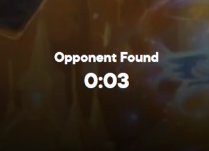 4. Once your opponent is found, the coach, or whoever initiated the queue is redirected to that new match automatically. All team members will see the new opponent matchup on their schedule from the Match Lobby home page, like the example below. 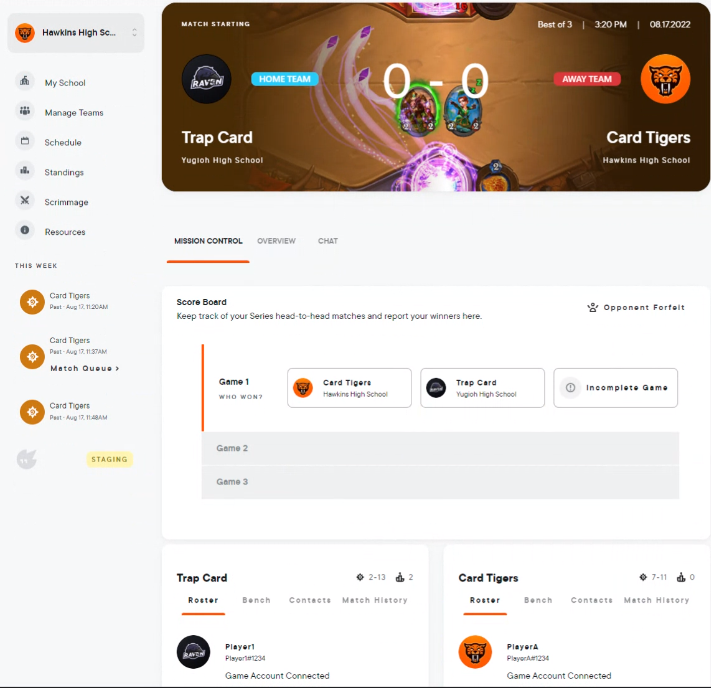 5. If we do not find you an opponent after multiple attempts, in rare cases, we grant your team a “bye” win. In a “bye” case, we couldn't find you a match opponent and your team automatically wins the match, as shown below. If your team would still like to play after your automatic win, you can join our Scrimmage queue for fun! 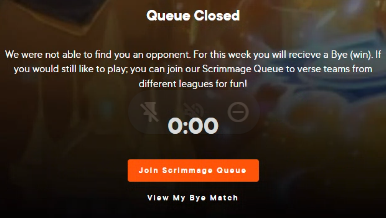